It's-a me, Mario! No, not really. But I'm here again with a lens review just like I warned you guys about. ;) There's still a lot more to come for this summer but today it's the TheDollyEye Lathae BD20 Brown that I will introduce to you! 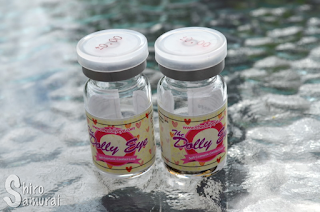 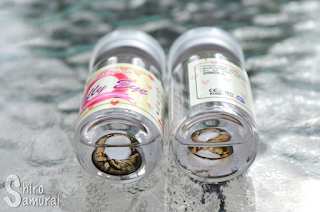 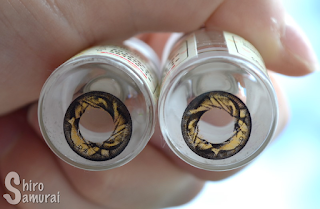 This is a lens that I really like in terms of design – it has a print that stands out from the crowd and still it looks familiar when worn. What I mean with familiar is that despite the print itself, that looks quite unusual, the overall impression still looks like those dolly lenses with a big black rim. ^^

I'm probably alone thinking this thought but ever since I first saw the Lathae lenses I thought it looked like there were fishes swimming around the print of the lens! It's probably just my eyes and my love for marine animals talking, haha.


When I look at the lenses I feel like there's perhaps a bit of an orange tone to them? Or it's my eyes being fucked because we recently had color analysis in school, lmao. The brown seems a medium shade and actually looks pretty nice on my light eyes; it's not the most amazing brown color I've ever come across but it's still a good one. The lenses also cover my real eye color, except for the pupil hole of course.

It's a cute lens and will work for many looks. The thick limbal ring also adds the illusion of bigger and bolder eyes! I like these lenses but I feel like the blue ones looked much nicer on me personally, haha.

Lens photos ahead!
All photos taken by me during a May morning with a clear sky. Close-up photos are all free from color filters etc and that's so that the colors would be as true to real life as possible.


And then we get to the point where most lenses either soar high or crash and burn – comfort. For most colored contact lens wearers comfort is really important and can thus make or break a deal, for me it's no different. The shitty thing is that I have really sensitive/dry eyes and yeah, it feels like for every year that goes by it gets increasingly harder to find lenses that are comfortable – I haven't had a super comfy pair in a long time and, sadly, the Lathae Brown is no exception. :'(

I do suspect I might just have gotten unlucky with a Monday example because within 20 minutes these start to dry and feel stingy on my eyes. >o< After one hour I'm screaming to take them off because I can't stand it anymore. I even used eyedrops before putting the lenses on and still they felt uncomfortable; I could always feel them in my eyes and they felt stingy on and off. Sometimes they'd turn magically invisible and perfect for a while and that's such a contrast, lol. Most of the time I had the feeling of the obvious "there's something in my eye" and if you combine that with occasional scratchiness then it's just no. It's one hell of a roller-coaster because yeah, on another day they didn't feel that bad at all. I can't even. :S 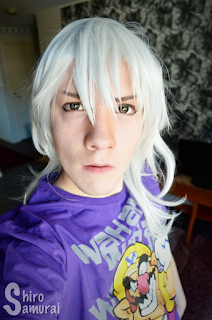 Color: 7/10
Nice toffee-ish color. Wish it would 'pop' a bit more though.
Design: 8/10
Cute swirly print that almost seems to have small fishes swimming in them, at least according to my imagination.
Opacity: 7/10
Decently opaque, makes my eyes look brown.
Enlargement: 6/10
Generous size boost.
Comfort: 3/10
These lenses give me trusting issues lol, sometimes they are fine and other times they're so dry and stingy after 1 hour that I'm clawing after them to get them off. Really unpredictable.
Naturalness: 2/10
The print is too fancy and the black limbal ring doesn't help either.