Wohooo, I finished it today! Ukitake's Sogyo no Kotowari sword in its usual sealed state. :)
The sword is a modified bokken/bokuto.


Here's the only in progress photo I have: 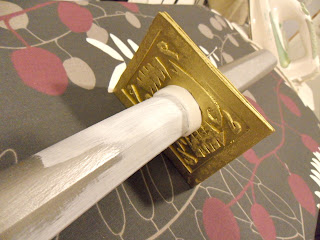 I did the tsukamaki (read: handle wrapping) some hours ago and recently I went and took some photos. Gosh how bad lighting we have in our house... the only place decent enough for photos is the shower/sauna room, lol.

I'm happy with it for now. Might eventually want to add a sheath.. we'll see. Also the tsuba feels a tiny tiny bit too big so I'll maybe remake it one day, but for now it'll suffice.


Sayonara!
Posted by Shiro Samurai at 20:52 No comments:

The next con I will attend is called Desucon Frostbite. It will take place in Lahti, Finland, 14-15 January 2012. This is the first Desucon Frostbite to be held, big sister Desucon has been held during the summers for some years (although I haven't attended it yet myself) and Frostbite, as name implies, will probably from now on be held during winters to come.

My cosplays are pretty much set in stone for the weekend. Both days I will be part of a Finnish Bleach cosplay group and naturally that means both my cosplays will be from said series. :'D Here comes the cosplay plans! 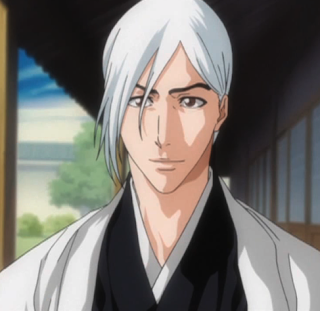 Surprised? I guess not...
So yeah, next in line is the TBtP version of Ukitake or well, ponytail!Ukitake as I like to say. Our Bleach group's main day is on Saturday and of course I'll be Jushiro that day, seeing he's my signature cosplay for the moment.
Because the con is held during winter I won't bring shikai with me this time, so I will just make his sealed state zanpakuto instead and carry it around. It's just way more convenient to be able to carry a sword on your waist instead of having both hands busy holding EPIC_SWORDS_OF_DOOM all the time, although I can't deny I love those things to bits.
Not to mention whenever I have to go outside I'd rather try and keep my hands warm under the haori and cover my face with a scarf so I can breathe properly because, as everyone probably knows, Finnish winters aren't exactly mild.

Gin? Yes, Gin.
I'm going to cosplay that always-smiling-sarcasmic-creeper-face-guy. And ironically I suck at smiling...
This will be the first time I cosplay Ichimaru so, err, we'll see how it goes. I'm so used to cosplaying Ukitake (been almost exclusively cosplaying him this whole year, go figure) so I guess it will take some time to get used to acting like an eerie bad guy instead of a happy occasionally coughing candysleeve guy, haha.


See ya there!
Posted by Shiro Samurai at 19:45 No comments:

Oooookay, so where do I start? :-D

I guess this is my... third blog? Oops. Oh well, I will strive to not let this one die out haha. xD
I will report my cosplay happenings here - what anime cons I'll be attending and summaries of those, cosplay progress, dream cosplays, photoshoots etc. Basically anything that is somehow related to the wonderful world of cosplay, wohoo!

Oh, and yes, this time I will be writing in English as you can see lol instead of Swedish or Finnish, which are my main languages. I decided to do it this way because English is a global language (basically, all over the place) and thus more people can actually read all the crap that I will write here.. if someone will do that, haha. :'D So yeah, reservation for eventual bad English but hey, I do hope you will enjoy the ride with me and this new blog!