Yeah, the next con I'm planning to attend is Chibicon. It's held at Oulu 7th April.
Good for me Oulu is not far away from my hometown (100 km maybe?) so it won't take a day to get there and cost my ass to travel. According to what I checked up the train tickets from Kemi would only cost me about 8 € one way and the same amount back again. OMG CHEAP. Well, compared to the 140+ € my train tickets to Lahti and back went on... Oh, and one of my mom's sisters lives there so maybe I could sleep over at her place. Hopefully. I don't know if the con has an entrance fee.. I guess it will...

I'm thinking about bringing my first (or second, depending on what you count, Ichigo was the first I started making but second I debuted) cosplay back to life after... err, a 2 years pause? I think my Ichigo Kurosaki cosplay last time saw daylight in December 2010. Oh booya that's some time ago man!
You know, getting that 150 centimeters huge butcher knife from place A to place B isn't the most easy and convenient thing to do, especially not when the destination is at the other end of the country. -.-" That's why Ichigo has been forever alone in my closet, waiting for his time to shine, his huge-ass sword severely limits what cons I can take him to...
But yeah, now when Oulu for the first time gets a con –although temporarily, I guess, because Chibicon seems to move from town to town now– I think I can bring him out. It will be interesting to travel with that sword though; I think I'll put it in my kendo sword carrying bag while at the train but it's a bit too short for it so the handle will stick out though, but as long as it doesn't look overly suspicious I think it'll do. I can't carry that thing open in public without getting stares you know, need to hide it. xD Oh, and Jäärä will hopefully accompany me as Rukia Kuchiki from Bleach.


Nothing else to say, final cosplay plans coming soon. See ya!
Posted by Shiro Samurai at 14:32 1 comment:

Ahaha, gosh... so today I started watching the Hakuouki Shinsengumi Kitan anime... and I'm hooked! I've been watching episode 1 to 9 pretty much without pauses and AHRGSHHAGDJADGS must cosplay Souji Okita! He is just too awesome! Ugh I feel bad for him, I have a feeling he'll die of his illness... Hajime Saitou I will probably also cosplay, he is cool... oh boy, my cosplay list sure keeps on growing man...

But yeah, truth be told I've known and been interested in Hakuōki for a while already, but it was only until some few days ago when I got really really interested. See, I happened to hear that the game had been released in America for PSP recently and so of course I had to order it when it now was available outside Japan and I can understand the plot. lol (I've been planning to get it anyway)
Then I watched the anime because I was so curious and it seemed pretty... and now I'm sfihufgufihuihuuh I love animes like this! It's awesome it is based on historical persons, shinsengumi etc. I like that kind of stuff.

Now I need to decide who to cosplay first, Okita or Saitou? I guess it'll be Saitou because he is easier but I love Okita more... oh well, I get more time to do Okita just right, and besides I'll think I'll go with the more complicated game version of him because he has that beautiful golden ring patterning on his kimono's left side in the game, it's absent in the anime.

UOOORGH, I already find myself looking for wigs for Saitou and references and whatnot... lol the life of a cosplayer, my wallet probably hates me. XD
Posted by Shiro Samurai at 21:37 No comments:

Ah, Kitacon in Kemi is now over. It's the world's most northern con (what I've heard) and only maybe a 25 km drive from my home.. heh, the only con in Finland that can be considered close to me. Normally I have to travel to the other end of the country for cons...

Oh well, my friend Jäärä visited me during the weekend so we could go to the con together. She cosplayed Retsu Unohana in her Turn Back the Pendulum version to match my Jushiro Ukitake cosplay, both characters from Bleach. We both had shikai versions too, meaning I had my twin swords and Unohana had her Minazuki plush... it had a zipper in the mouth so we could carry our money and camera and stuff in it. Very handy. But Minazuki's face kept derping. xD
The con was small-ish but comfy and the atmosphere was right. We just walked around the con and had fun and all that jazz. At one time one of the cosplay competition judges saw us and went "Hey guys, you two should seriously consider entering the cosplay competition!" (or something like that) and first we were unsure but then we signed up anyway. They had actually just closed the registration but they made an exception for us. We competed as a duo by the way, if it was not clear. I was so nervous and me and Unohana were the last ones (number 22) to go up to scene. I'm not really the one to stand on a scene normally and I was so nervous back-stage even though I've competed at two small events before too but I somehow relaxed as soon as we entered the stage together and the audience cheered loudly. We actually got 2nd place together, it felt awesome. Yay we got cosplay medals~

I won't tell so much more about the con but if anyone is interested to read more about the weekend there's some more information in my journal at deviantArt. Now I'm waiting for the studio photos taken of us. I hope I'm not doing stupid faces...

Oh, and we got into the Pohjolan Sanomat newspaper... so there's a big photo of us two in costume. Oh gawd. x)

Yay free day from school today, and mom worked until very late and stepdad had evening shift... house for myself most of the day... and that can only mean one thing.. cosplaaaaay~
Heck, I needed to test ponytail!Ukitake (aka Turn Back the Pendulum version) again because that's my Kitacon cosplay and err, maybe it's just me but I find I look totally durp with hair tied back. Oh well, I've considered cosplaying all canon variations of Ukitake so yeah, should do that version at least once too, no matter how silly I look... or not. People say it looks alright though so maybe I'm just being a self-critic again... *shrugs* 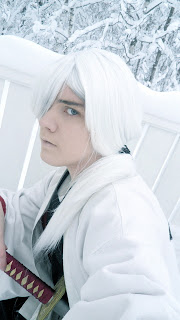 See ya at the con!
Posted by Shiro Samurai at 23:05 No comments: