Since the later half of last year I've been silently collecting the gear needed for cosplaying Leon S. Kennedy from Resident Evil 4. I'm not sure if I've mentioned too much about cosplaying him on this blog but he's been in progress for a while.

Leon is not a character I would typically cosplay as I really can't stand to play any kind of horror games myself (I get too easily scared...) but watching my friend Sacchan play through the whole thing was a different deal and, quite honestly, a lot of fun! I ended up liking the storyline, the characters and the overall feel of the game – despite it being just the kind of game that I'd normally have very limited interest in as I'm not a fan of shooting nor horror games in general. ^^" I liked playing all the shooting target minigames though, lol. I must admit that I've been enjoying playing the later Resident Evil installments in the co-op mode with friends though, although I am aware that RE4 is considered one of the best ones and I can totally see why – but the newer ones I played with friends were easier on me as there wasn't that tension of a horror game and instead it was just a mash-buttons-to-kill-as-many-zombies-you-can-before-the-time-runs-out type of thing. xD
But yeah, Leon clicked with me and so I decided that "hey, why not do something different and go out of my comfort zone?". Said and done.

I think I started gathering materials for this cosplay around August something last year. About everything is purchased from various eBay sellers, except for the jacket which I got from CosplaySky (I will review it soon!) and the pants that I already had. At this point in life I didn't have the time nor energy to make the costume myself and, frankly, making all those gun holsters etc would have been really annoying and pointless seeing how cheap I could get them online. I'm lazy sometimes... and out of cash all the time.

I did a makeup test for Leon yesterday and I must say that it was a bit of a different experience. You see, I'm so used to doing the heavier "anime makeup" that when I did Leon I had to do the makeup more subtle and realistic, which proved to be a challenge! I'm so used to the black liquid eyeliners that when I had to do a more natural approach –since Leon is a video game character– it felt weird. I had to avoid covering up "too much" (Leon wouldn't have perfect 2D anime skin) and for the eyes I just went with dark brown pencil eyeliner. 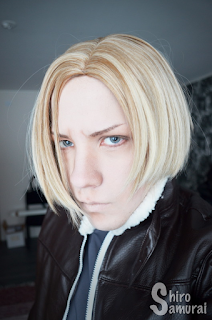 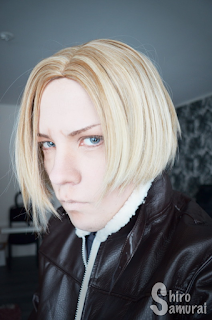 I'm not wearing any contact lenses for Leon on the costest photos above, although I do have gray lenses especially bought for him. I want to save those for a later time as I kind of want to make a rocket launcher prop before I have any kind of proper photoshoot.
Also, I'm still not too sure if I really suit this character but oh well, who cares? :) I want to cosplay him and so I do. Fight me bro. I might still experiment further with the makeup (especially the eyes, as it feels like just pencil eyeliner doesn't stand out enough) and I have some ideas on trying to "grease it down" or what-to-call-it – like doing this kind of look that you've been out blowing zombies up for a while and there's dust and dirt all over...

Regarding the wig it was a bitch to find a suitable one, not gonna lie. The only character wig on eBay didn't look like I wanted mine to look and so I had to resort to searching for generic fashion wigs instead.. and pray for decent quality. Thankfully eBay is full of those but oh fucking boy, how hard it was to find one with a parting that is not a middle-part. >_> I eventually found a base wig that would work, although I had to compromise on color a bit as Leon's hair tends to generally be portrayed as this kind of dark brownish-blonde shade, although it is really inconsistent (I've seen cosplayers doing everything from blonde to brown and even black) and so I deemed that the wig's color wouldn't be that big of a deal. I went with blonde.


Sacchan did the cutting while I had the wig on my head. I have a larger head than average and so it was safer that I wore the wig during the cutting process so that we'd get it to be the right length. It was really important that we didn't end up cutting it too short, as that would have looked really unflattering on me. I might eventually trim it a bit more but yeah, I can't say for sure until I've straightened it and wore the wig to a photoshoot or such, to see how it behaves.

I think that's about all I had to say for this round. The review for Leon's jacket will come up soon so stay tuned for that!
Shiro Samurai out.
Posted by Shiro Samurai at 13:12