Once again we're nearing the end of yet another year and every time it feels just as sudden. I don't know where the days go but I know that time can't be stopped from running its course. I can say already now that in terms of cosplay the year 2017 has been very... underwhelming. I'm just not feeling it and trust me, I'm not happy about it either.

As per blog tradition, I'll start by listing all the conventions that I attended during 2017:

Well, that list is not very impressive. I tick in at 6 cons for this year and I think that's a "personal worst" if we don't count my first cosplay years in like 2010-2011 something (aka before I even had this blog). One might notice as well that out of all these cons Närcon is the only big one – the rest are all what could be considered as local small cons, save for the one in Eura as that's totally not local for me. xD I just haven't been feeling the con hype this whole year and there's been a lot of other shit getting in the way, like school and mental health.

2017 is pretty similar to 2016, except probably even worse. I've literally only had 3 photoshoots during the whole year, of which only 1 can be considered a proper one. Needless to say the lack of new, updated cosplay photos is huuuuuuge. It's like I know I've improved but I have nothing to show for it and it makes me feel shit, lol. I'm not getting my hopes up about 2018 being much better in the cosplay department since I'll probably be very busy with my new school and other real-life matters. Yep, I'm starting new studies in January and I'm finally gonna get myself a profession! 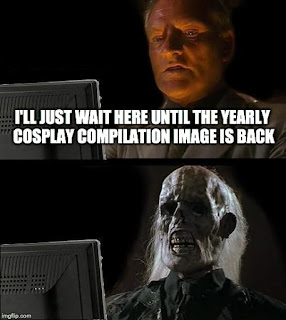 I think this has turned into a meme of its own by now. x) Every year I wear fewer costumes, which of course naturally results in fewer photos and thus nothing to really show the world. This year it's the same curse – out of all four cosplays (wow, what a number) that I wore to cons I only have non-selfie photos of two of them, and that's like two photos of Itachi and one photo of Prussia. Urrrgh. Wake me up inside.

Here's a little list of what I wore at the cons I attended this year:

Matsucon: I wore my kimono!Itachi (Naruto) cosplay on Saturday and went casual on Sunday.
Euran Mangapäivä: Rewore Itachi again.
Mushucon: Because it was really spontaneous I went causal.
Närcon: I borrowed Firith's Teutonic Knight Prussia (Hetalia) cosplay on Thursday and wore swordboy Yasusada (Touken Ranbu) on Friday. On Saturday I wore a Rilakkuma kigurumi and on Sunday I wasn't even at the con.
Chibicon: Filthy casual.
Skecon: No cosplay on Friday, Gin Ichimaru (Bleach) for a few hours on Saturday and no cosplay on Sunday.

Yeah. I haven't done a lot of cosplaying this year, what more can I say?
I guess my favorite con of the year would be Närcon, but even that is with mixed feelings. I got a lot of joy from being with my big sister for the last time before she moved to Germany – I'm happy she came with me to visit Närcon on one day as well! It's gonna feel weird to not be able to sleep at her place during the con weekend anymore but oh well, there's the Närcon camping. It was fun to hang with Firith as well, although I'm still sorry about some of the things that didn't quite go as planned and I hope it didn't screw up the experience too much for my friend. :'(
Otherwise Mushucon deserves a mention because, despite our trip being super sudden and spontaneous it was surprisingly fun! Although I guess all the derping with friends in the camper accounted for the positive memories of the con. xD

I'm sorry about this whole post being kinda low in tone but, honestly, that's what this year has been like for me – lowkey shit. Of course it has had its great moments but I feel like for most of the time I've been my own anxiety's victim, combined with stress and whatnot. I just haven't been able to enjoy cosplaying and going to cons the same way as before and I miss the magic, honestly. I'm hoping that the future will reignite the fire that I've been searching for the past couple years. I'm also hoping to get at least one big cosplay project done next year (Monster Hunter anyone?) and that I'll have more time, money and inspiration to go farther to explore new conventions!


But before I end this post I want to thank all my friends, readers and everyone else who stumbles upon this blog of mine – I hope you all will continue to come back to read about my cosplay life and support me! Thank you so much for staying with me, like really.