As I promised on the last crazy lens review... here's the next one!
This time around I'll be showing you all the ColourVue Crazy Lens Emerald, which is a pretty interesting lens that gave me a couple surprises. 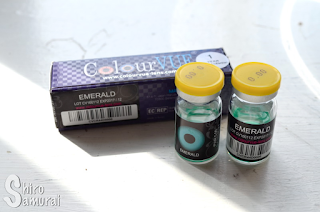 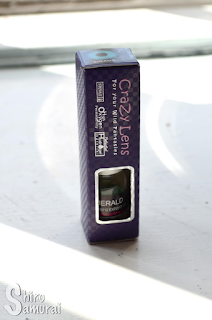 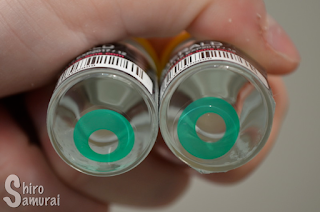 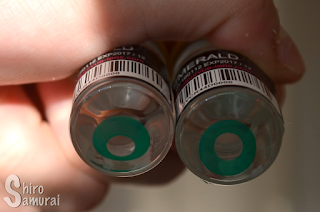 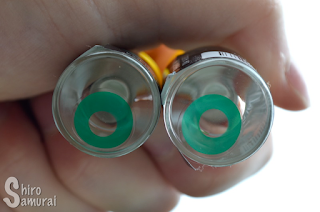 I have to say that photographing these lenses in their vials was stupendously hard!! They always turned into this weird light fluorescent blue-ish green on camera when they have a richer, darker shade when viewed in real life. The photos above are the closest I could manage but it's still not 100% accurate to show what the color looks like...


My natural eye color is a light blue-gray and these crazy lenses turn a really interesting color on my peepers! They are not completely opaque –and the little amount of transparency that there is– makes a really cool effect and attempt in making the lenses appear slightly more... realistic, I guess? It's a bit hard to explain but the way these go over my eyes makes them look a bit more believable than those 100% opaque single color crazy lenses that are quite popular and have the same base design. I really dig the effect the lenses create – it would be super cool for doing stuff like zombies, virus or possessed humans, supernatural beings and the like. I see the Crazy Lens Emerald as a pretty versatile lens, partly thanks to its transparent effect.

Lens photos incoming!
All photos taken by me during a December morning with a sun that barely rises above the horizon line so yeah, polar night is a bitch. :D
There's no color filters or such on the close-up photos and that's so that the colors would be as true to real life as possible.


I love how bright these lenses are – the color looks so unrealistic but in a super cool way! Also, because these lenses are slightly larger than my real iris there is this thin colored rim around my eyes that shows the true, unblended color of the lens and it's a nice touch; it's almost like some sort of 'halo effect' but for single color lenses, hehe. I could totally see these work for cosplay and crazier alternative fashion styles!

I was really surprised when I put these lenses on because they felt so thin – I literally didn't feel them in my eyes! Most times crazy lenses tend to feel a bit thicker than your average circle lens but these were super thin (without being flimsy) and invisible to wear, meaning that I don't feel them in my eyes. These lenses don't obstruct my vision in poorer lights by doing the "colored corners" effect either, which was a positive surprise as I was expecting it, considering that these don't have the typical large pupil hole that circle lenses normally have; crazy lenses tend to have smaller pupil holes and thus obstruct the vision. These don't scratch, sting or do anything of the sort – although I must admit that I did experience having my vision blurred during night-time when sitting indoors with poor lights.
Regarding wear time I guess, with my extremely dry eyes, it's not that bad – I would say anything between 1-3 hours, although if your eyes are not dry I would guess that these could easily go past 5 hours. These lenses are generally really pleasant to wear except that, in my case at least, I did experience semi-regular dry bouts every hour that stung my eyes for a couple or so minutes (it felt like I really needed to take them off) but then the irritating feeling went away, as suddenly as it had come, and the lenses were perfectly fine again. After the third hour clocked in they started to feel legit dry and that's when I gave up. 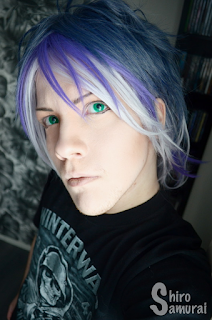 Color: 10/10
Single color lens with an awesome but weird green shade that really pops!
Design: 8/10
Simple single color design but the transparency makes it stand out from other similar lenses.
Opacity: 8/10
These don't have perfect coverage but instead shine through a bit, creating a fluorescent effect that's really intriguing.
Enlargement: 2/10
Barely noticeable but enough to give a small green rim around my eyes, at least.
Comfort: 4/10
Really thin and generally invisible and pleasant to wear (save for occasional dry bouts) but, on my super dry eyes, wearing time is around 3 hours at most. Might blur vision slightly in poorer lights.
Naturalness: 1/10
The color screams fake but I'll give one point for the blending... in crazy lens standards. ;)