Hello ninjas and geeks~
It's time for another Sharingan contact lens review and yes, this one is also from the Funcle series! Today I will share with you a review of the I-Codi Funcle F207 and without further ramenblings let's get started! 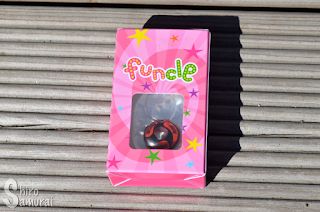 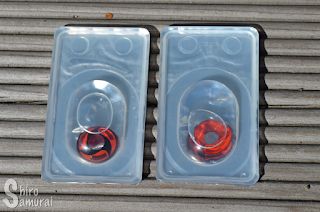 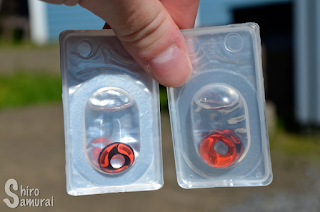 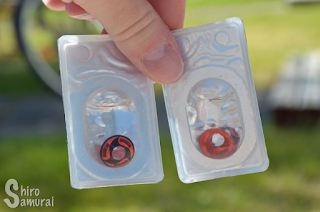 This lens design is very clearly styled to look like Sharingan (lit. Copy Wheel Eye) from the popular Naruto anime series. I can't guarantee these being 100% accurate or canon as there's a lot of different evolved and advanced forms of Sharingan eyes throughout the Naruto manga and each character tends to have their own Sharingan designs too. Oh and yeah, for those unfamiliar with the Naruto series Sharingan is one of the Three Great Eye Techniques (the other two being Byakugan and Rinnegan) and it's a special type of doujutsu (pupil technique) that is most famous for being what makes the Uchiha clan renowned. The Sharingan's main ability is to copy any ninja technique that it sees the opponent using. It's pretty cool if you ask me!

This is a very eye-catching lens when worn, it's impossible not to notice! It's a bold print, similar in design to how a Mangekyou Sharingan might appear in Naruto – it has the signature red and black color and pinwheel design that is typical for the look.
There is a medium thick black rim around the edges of the lens which brings added intensity to the design. The color coverage is very opaque, my real gray-blue eye color doesn't show through the red at all! Of course it shows a little bit at the pupil hole in the middle but it's honestly not distracting at all as the opening is smaller than on your average circle lenses anyway.
Oh and yeah, these lenses have this curious little thing that despite being animation lenses they appear to almost 'glow' in certain bright lights, when not worn, due to the red color letting a tiny tiny bit of sunlight or such pass through it! It's really hard to describe but as someone who has worn a lot of super opaque crazy lenses over the years I just noticed it. It's like there's this ever-so-slight transparency that shows up in specific light conditions and yes, it's one of those things that you see with your naked eye but it's almost impossible to catch on camera lol.
One thing that I should also mention is that these lenses do spin a little (as most lenses do, although it's much more noticeable on lenses with certain designs) although, in my opinion, it's not as obvious as on the F105s I reviewed earlier. Could be just me but I felt like the F207s were less prone to spinning overall and if they spun I didn't notice it as much.
Lens photos incoming!
All photos taken by me during an afternoon with a mostly clear sky.
There's no color filters or such on the close-up photos and that's so that the colors would be as true to real life as possible.

Just like with most lenses I've reviewed lately these were part of the set that I had tucked away and forgotten about years ago. The sad thing is that I only found the lenses a while back and by then they had all expired in their unopened packaging. But instead of just throwing everything away I wanted to at least do reviews, in case it helps someone out there. This means that I only wore these lenses for the time necessary to take the review photos and then immediately discarded them, regardless of how comfortable they felt to wear. Please do not wear expired lenses for anime conventions etc because you want to save money or whatever, it's not worth the risks.
Based on my first and only time wearing these cool cosplay lenses (which was about 10-20 minutes) I can say that they were especially comfortable. I mean so comfortable that I literally did not feel that I even had lenses on! They were thin and so comfy and much better than I expected. Of course there were the typical red corners at the edges of my vision, which is pretty much always the case with this type of lenses (due to the pupil hole being smaller than on your average circle lens). In my opinion it's not particularly disturbing or anything and you honestly get accustomed to it rather fast. Of course if you move your gaze around a lot, especially in places with poorer light conditions, it can make you feel a bit nauseous with the "red tunnel" effect at the edges of your field of vision, especially if you're not used to wearing lenses that do this.
Summa summarum is that I wouldn't be all that surprised if I could wear these lenses for at least 4-5 hours (without eyedrops) if they had been fresh; it might not sound like much but that's a long time in my book, considering my eyes are naturally really dry and quite sensitive.
I personally think that these Sharingan inspired lenses are really cool and I would totally repurchase them if I could find them somewhere; ifairycon used to sell them back in the days but don't anymore. I think these are great for Naruto cosplayers and especially for original characters where it's not crucial that your Sharingan lenses have to look a really certain way (as is the case with existing characters). These are honestly really badass and if you're a nerd like me you won't be disappointed with the effect!
Distance photo!
Short summary:

Color: 10/10
Great red color and overall vibrancy, gives the desired effect.
Design: 9/10
Might not be 100% accurate to existing Naruto Sharingan designs but very recognizable and awesome regardless!
Opacity: 10/10
I have no complaints, great coverage and does its job.
Enlargement: 3/10
There's a slight enlargement effect but it's not much, really.
Comfort: 8/10
Very comfortable it seems, thin and I don't even feel that I have lenses on.. except for the red corners.
Naturalness: 0/10
Don't even try to convince me that you were born with Mangekyou Sharingan in this mortal world.

Consider dropping me a comment if you enjoyed this post. (´∀｀○)
Maybe you got inspired, learned something new or you have some other things you want to tell me? Don't hesitate if you have something to say – I'd love hearing from you! ♥ Psst, I read everything even if I don't always answer ~

I'm aware of how Blogger's new look screwed up my previous way of posting and that it now looks fugly on certain devices. I HATE the new blogger tbh but will eventually go through my old posts to fix it.. one day.

Affordable costumes online! Discount code CGSS129 for 12% off everything!